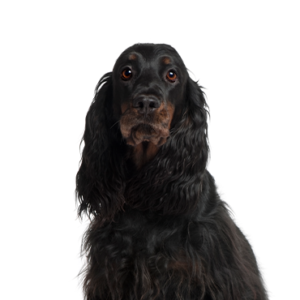 The Gordon Setter is known for its loyalty and devotion to its owner. Boasting of a silky black coat and relatively large frame, this canine’s high endurance, and stamina gives it the ability to go the distance without tiring easily. Discover more about our Gordon Setter puppies for sale below!

Deriving its name from the famous duke in the 16th, the Gordon Setter was said to have been bred by Alexander Gordon in his royal kennels which followed him about when he went hunting.  In the past, the Gordon Setter was used as a hunting dog because of its high endurance and intelligence when it comes to tracking birds. Golden setters were also used in the later years as sporting dogs as hunting became less and less over time.

The Gordon Setter is described as a jealous dog, so it can be somewhat hostile to whatever captures its owner’s attention. Such trait is accompanied by this pooch’s unwavering loyalty to its owner and expects the same in return. Very loving and sociable, the Gordon Setter only needs to warm up to someone to really get comfortable around them.

Gordons need a lot of room to expend their energy so quite some room is needed to engage this hunter’s energy.

As is normal for wandering dogs, a fence is required. Gordons love to be around others and would most likely be practically anywhere company is, so this dog can live anywhere provided it can roam every now and then.

The Gordon Setter is quite the active dog as is with most gun dogs. This pooch needs about 60-90minuites per day of physical activity with its owner to keep it sound mentally and physically.

Bear in mind Gordons can suffer from depression anxiety, the bonding is just as important as the exercise.

Clipping should be done in about 4months at the interval and the coat should be brushed at least twice a week due to heavy shedding.

A bath is needed when it becomes visible that the dog needs cleaning and when it smells offensive. In the case of excess shedding, a professional can help with trimming the coat.

The unregulated breeders who are selling outside of the USDA regulations and without a license are what we consider to be “Puppy Mills.” We are committed to offering Gordon Setter puppies who will grow up to become important members of your family. We only purchase puppies from the very best sources, and we stand behind every puppy we sell.

The Gordon Setter is a great match for a vibrant family setting. Especially when it comes to children because they love to get involved with activities being an active dog.

Gordon Setters are considered very intelligent. After all, they served as gun dogs for the vast part of the early 19th century. They are able to execute various tasks and reinforcement should be used.

Gordons have a tar-black long silky coat which requires a lot of grooming to keep it flowing. Coupled with the lively and adventurous nature of this pooch, it tends to get dirty when left to move about. The Gordon Setter also sheds a lot so it should be brushed frequently.

The Gordon Setter is very much an energetic and lively pooch by nature. That being said, Gordon Setters do well with owners or families that engage in various activities be it a walk to the grocery store, heading down the block to see a friend and so. In a day, Gordon setters should get a minimum of 1hour exercise. It is not exactly the quickest dog but it has high endurance and loves intense exercise.

As the Gordon ages, it tends to develop quite a few health concerns. Some of these include; joint dysplasia, retinal atrophy, and cataracts, and gastric torsion. A veterinary doctor should be contacted frequently for check-ups and adequate health care.

Both genders; male and female Gordons have their advantages and disadvantages. That being said, this choice is up to the owner.

Gordon has a life expectancy of about 10-12years.

The Gordon Setter makes for an excellent watchdog, after all, it was bred to be a hunter dog. Not exactly the quickest of breeds but expresses high alertness and very much in tune with its senses. It can get apprehensive towards intruders and will make sure to alert its owner.

Gordon Setters are relatively rare, especially in America and are most likely gotten from a renowned breeder usually by order.

It depends. Contact us today for availability and cost.

The Gordon Setter is the perfect depiction of the saying “a dog is a man’s best friend”. Vibrant and loyal, you can never go wrong with him as a companion.